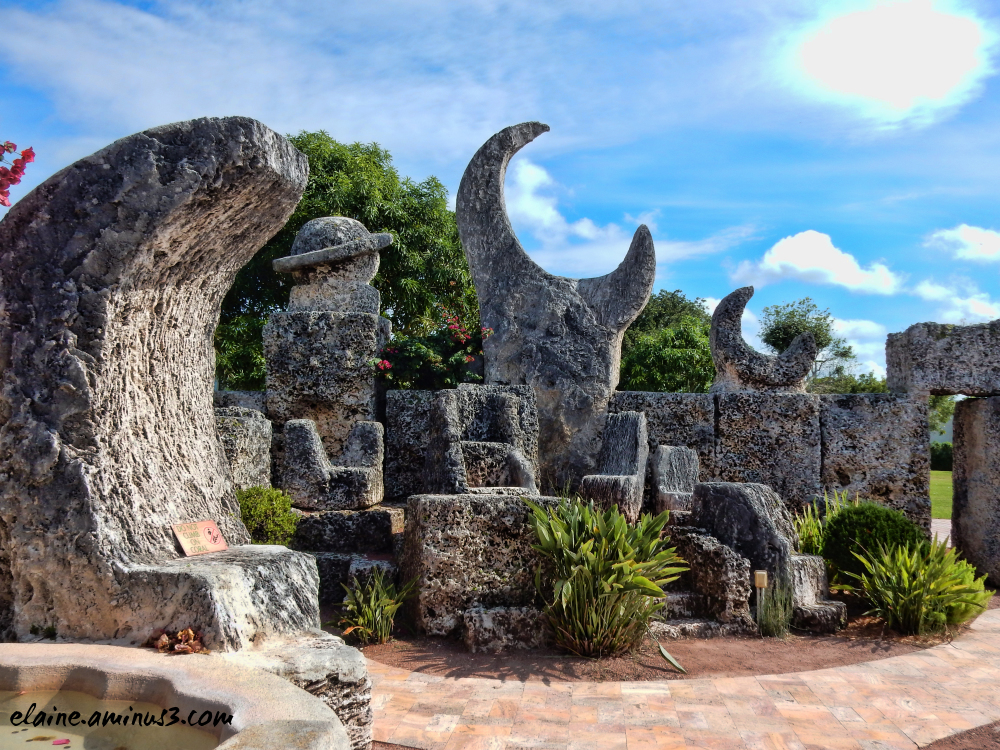 Coral Castle is a limestone structure located in Homestead, Florida. It consisted of a castle like structure that was living quarters and a large courtyard surrounded by a tall wall. It was created by the Edward Leedskalnin (1887–1951). Edward spent more than 28 years building Coral Castle, refusing to allow anyone to view him while he worked. He excavated, carved, and erected over 2.2 million pounds of coral rock to build this place. He built his castle to impress Agnes Scuffs, who had decided not to marry Edward on the day before their wedding. Edward lived there alone until his death.

though one can't but help admire the carvings, one feels sad to see the reason ( inspiration ? ) behind this !
Most beautiful art pieces come out at the height of sadness, it is said..
For instance( though there are many contradictions here ) Beethovan's Fur Elise ..the most appreciated piece of music( I simply love it !!) was composed when his proposal was rejected by Elise whom he loved( she married a Duke from Amsterdam , it is said ) ...
A very beautiful image !!

What a fascinating discovery . . added to all the more by the story to go with it !

A very interesting image, and a very sad story about Edward Leedskalnin and Agnes Scuffs. 5*

such beautiful composition, colors, lights & details!
A M A Z I N G !

Wow...impressiv work of a life and very beautiful composition .

Beautiful sculptural space and what a sad story to go with it. Still I guess all that chipping helped take his mind off things :) Very nicely captured

The Things we do for love. Ah, and then he doesn't get the girl. I hope Hallmark makes a movie about this but "corrects" it so Ed gets his love!

What a sad story. HIs carvings are beautiful. I love the curves.

Quite an undertaking that he took to impress the woman who scorned him! A nicely-framed view with beautiful colors, textures and forms! How unfortunate that he died alone.

Good composition for this interesting image. It is definitely not a Hallmark ending to the sad story.

It looks like a scene from an alien universe. Edward was one determined guy I guess.

Interesting structures and a great (if sad) story behind them. Love the composition and detail.

This is very original !
The great work that Mr. Edward did here, was, surely, a sad reminder of the disappointment that he suffered.

a bizarre life dedicated to a bizarre quest; perhaps Agnes made the right choice.